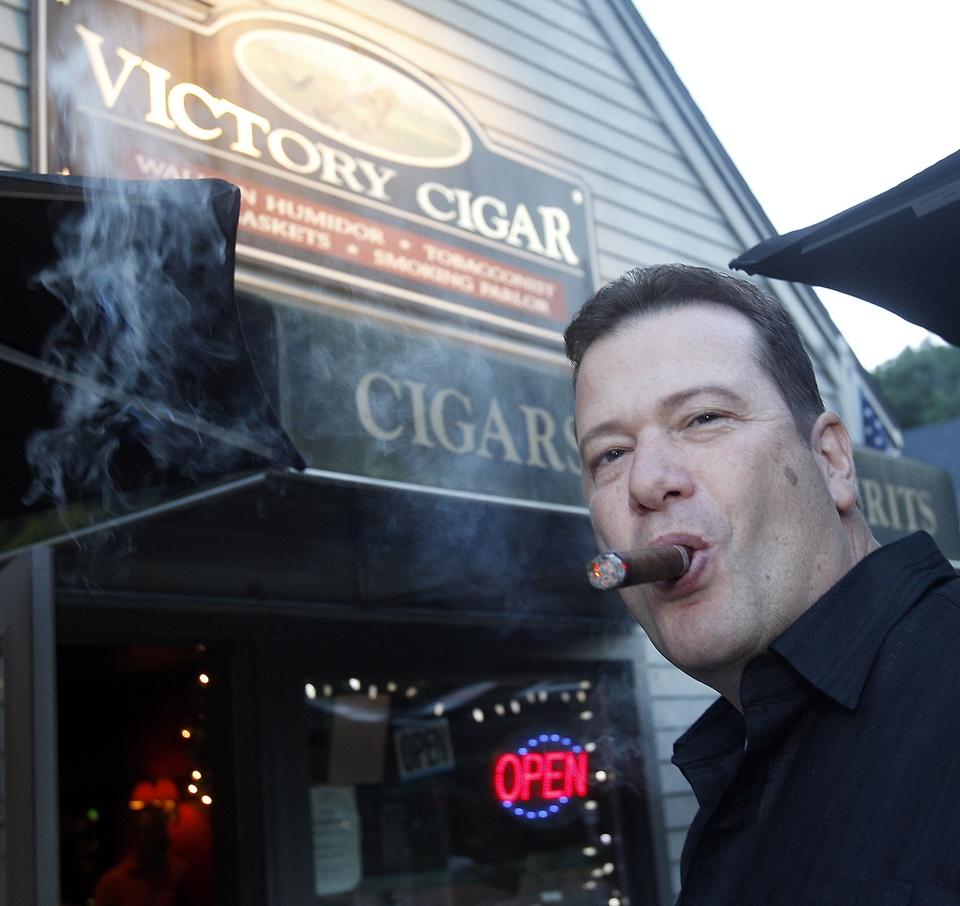 It’s a handsome, cozy room, as long as you don’t mind the smoke. Nobody here does. They actually like it. This is their place, where no one looks down on them with turned up noses. Nope, you come to Victory Cigar for a reason.

So why does she tempt fate by tending bar at Victory Cigar, the local haven for cigar (and cigarette) smokers in the Dudley Square Plaza off Rte. 20? “The smoke doesn’t bother me,” she says.

For Ogar, it’s not about the smoke, it’s about the people. Sure, indoor smoking in public places is against the law, but that makes this place, exempt from the law, a haven for those who choose to light up. Cigar smokers are a society unto themselves. So they come here.

“They’re from Sudbury, Hudson, Framingham, Southborough, Marlborough, and all the way out from Wellesley,” says Ogar. “We have out-of-state customers who are in town on business. They’re looking for a cigar bar.” Word of mouth on the Internet leads them to Victory Cigar.

“We’re the last frontier,” says the cigar bar’s owner Gino Allia, his wide smile an indication he’s proud and happy to provide a place for puffers.

Dave Parsons has been a regular here since it opened. The self-employed Sudbury businessman will slip in at lunch time for a smoke and if there’s a ballgame on, all the better. “I can watch the game and smoke a cigar,” says Parsons. “I can’t do that at home. This is a quaint place. We talk about sports, politics. We talk about anything.” Occasionally his wife, Jane, joins him. “She’ll watch the game and have a glass of wine,” says Parsons.

Former Red Sox pitching great Luis Tiant, who has his own line of cigars, drops in now and then and is almost never seen without a cigar going. Tiant would get a laugh when he’d take a lit cigar into the shower when he played for the Red Sox.

When Victory Cigar was for sale nine years ago, “we (he and a partner) jumped on it,” says Allia, a Framingham resident for 13 years. “We restructured it, refurbished it. Upgraded the furniture. New couches. We increased the bar size.

“We wanted to make it more comfortable, more friendly. People can come here and forget their troubles.” There’s also a patio out front.

Brad Safford of Framingham has been a regular here since it opened in 1998. “Gino’s done a great job with it. He’s given the place a personality,” says Safford. When he’s on the road (he’s in the software industry) Safford seeks out cigar bars but “they don’t measure up to this place. People are great here. It’s a non-confrontational place. No behavioral problems.”

Naturally, there is a room stocked with a wide range of cigars, from five to 40 bucks (true connoisseurs can go a little higher).

“Everybody in here is super friendly,” says Ogar. You can be a complete stranger and fit in. Men, and women – some of them share a cigar with their husbands.”

With four plasma screens and another coming, ballgame watching is a constant. However, there is a little problem during the football season. Nearly everyone who comes to Victory Cigar is a Patriots fan. The owner isn’t. Worst part of it is, he loves the Pats’ arch-rival.

“I’m a Jets fan!” Allia emphatically announces, not caring if that upsets the customers. Allia was – and remains – a big fan of former Patriots coach Bill Parcells. “When he left the Patriots to go to the Jets I became a Jets fan.” And remains one, even though Parcells is running the Miami Dolphins these days.

Allia had been in the restaurant business for more than 20 years, and will open a restaurant in Townsend soon. He worked at the Coach Grill in Wayland and several Back Bay Group hot spots in Boston. “I’ve been behind the bar, and a bar manager.”

At Victory Cigar, he’s hired three attractive bartenders. “That always helps,” says Safford. Ogar, Ashley Hanson of Framingham and Jen Pierce from Rhode Island take care of the shifts and will help a customer choose a cigar. If a preferred brand isn’t in stock, they’ll try to order it. “I can’t say enough about them,” says Allia.

Victory Cigar doesn’t serve food but Parsons swears “it has the best popcorn and coffee in town.”